But beware: Don't play if you are having OCD ... seriously, don't.

If you are experiencing audio issues, try using Chrome or download the desktop version or press 'M' and 'N' to mute music and sound effects.

Will need Java version 12 or earlier to run.

The game won't load, It's just stuck at a black screen.

Hi, what browser are you using? Also try refreshing the page at least once, that sometimes helps.

Hi, I can't reproduce the issue. What operating system are you using? Can you try with different browsers and check and tell if it works with them? Also update Chrome to the newest version in case you are using an older version.

If nothing works, can you try sending me the console output when the game is stuck at a black screen?
See instructions here: https://stackoverflow.com/a/31059700 (Press F12 in chrome, choose the "Console" tab and right click the list of messages and choose "Save as..." and then save to a file.)

It should most likely contain red error messages. You can send the file to support [at] accidentlyawesome.com and that might allow me to find out what is happening.

I love this! I wish there was a way to take a screenshot of my monstrosity

what music is this?

We, humans. Have made this of an absolute gem.

I am having issues running the game. I am not sure if I need a different version of Java or? Here is the output from java -version

Yes, the game was made back when Java 8 was new. Just tested and the game does not run with java 13 or newer. So you will need any java version from 7 to 12 to run the game.

I was wondering if there was a way to run it on desktop, I'm not too good with computers so I might have just completely missed something. If there is a certain file I need to find I can try to find it, but my wifi is terrible so I am asking if there is a way to open it outside of the browser.

You can use the big red download button at the bottom to download the "Infinitris_v1.0.jar" file. You will need Java (if not already installed) to run it. You can get Java from https://www.java.com/.

Awesome, I wasn't expecting a reply this fast since the others were a year ago, but thank you for the explanation, I was just looking for an .exe file so I don't think I ever would have figured that out

Hey! I'm an experienced tetris player. This is a funny game and you did a pretty good job! My only complaint is that you didn't implement any types of spins except tspin doubles. I suggest looking at the hard drop wiki for more on what I'm talking about! I tried doing j and l spins, t-spin triples, I-spins, z and s spins, all of which didn't work. SRS is a beast  and I totally understand if you can't implement them for whatever reason.

It was a good game though, and I'd like to see more in the future!

Hi, glad this gets the approval of a professional ;) Back when I made this I had no idea what spins and kicks are and that Tetris could get so sophisticated. I have never implemented those things, so I don't know how hard it is to do, but seems like a good challenge for a rainy day.

You should make something like this but with puyo puyo, it would be insane the kind of chains you could make with infinite height/distance.

Never played puyo puyo, but that actually sounds like a fun idea. However it's probably gonna be a while before I'll get to that.

how big is the map tho?

No matter how far you go, you will never reach the end. :P

On a more technical note: The world is stored in chunks of several blocks and new chunks are only created when you place blocks in them. I'm not sure about the web version, but the desktop version stores the positions in 32bit, meaning at roughly 2 billion blocks from the starting location, the game would crash. But before that you would most likely see massive slowdowns (since all chunks are kept in memory) and/or a lot of graphical glitches (due to floating point imprecision) similar to what happens when you go too far in e.g. minecraft (You can look it up by the name of "Far Lands").

So, for all intents and purposes, the map is infinite.

I see, can you guys make new games about tetris like this, but can it be finishable? :x because i played the game sooo long, every time i placed a block wrongly, i started over by closing and opening the game, anyways, i'm trying your new games right now. You guys deserve to have more players at least. And PLZ make new tetris based puzzle games!!!

Thank you for your kind words.

In the future there will probably be puzzle games too, but at the moment no tetris puzzle game is planned. 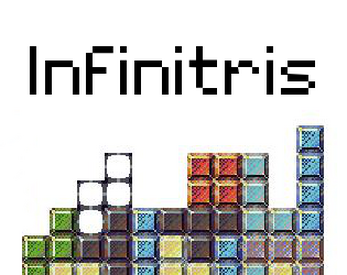